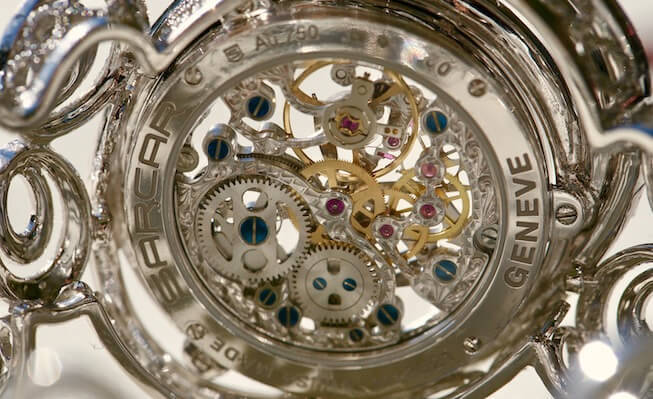 Watch movement, in simple terms, is the ‘engine’ of the device. It encompasses all the internal components that work together to make the watch hands move. Sometimes also called ‘calibre’, watch movements are crucial to consider because they determine the reliability and accuracy of the time-keeping device.

The mechanism involves a mainspring, which must be wound to power the balance wheel, which oscillates at a constant rate. With each swing of the balance wheel, the escapement of the watch releases the watch’s wheels to move by a small amount, and this is what makes the watch run at a regular rate – and also produces that signature ticking sound.

Manual-winding movements must be wound periodically to power the mainspring. So, if you own a manual-winding watch, you have to wind it by hand every so often if you do not want the watch to stop.

On the other hand, automatic mechanical watches have a rotor that connects to the mainspring. This weighted component swings naturally as a result of the wearer’s hand motions, thus effectively powering the watch whenever it is being worn. If you own an automatic watch, you don’t have to worry about winding it – but you do have to wear it often enough to keep the rotor moving.

While mechanical watches are favoured for the craft and history involved, it is not perfect. Wear and tear can cause watches to lose time, due to dirty parts or components that have lost lubrication. As such, mechanical watches require regular servicing (most watchmakers recommend a servicing once every 2 years) to keep them working in tip-top condition.

What about quartz watches?

Today, quartz movement watches make up the majority of watches on the market. Their appeal is well-founded: they are typically cheaper, easier to maintain, and more accurate than mechanical watches.

Rather than relying on mechanical motions, quartz watches are basically electronically powered. A small battery sends an electric current through a quartz crystal, which vibrates at a constant rate to power the motor of the watch.

First introduced to the market by Seiko in 1969, quartz watches were not always so cheap. However, as watchmakers found increasingly better ways to mass-produce the quartz movement, it soon became widely available at very wallet-friendly prices.

Quartz watches are relatively easy to maintain, because they have fewer moving parts than a mechanical watch. Generally, all it needs is a battery change when it runs out of juice, and the occasional servicing (about once every 10 years is recommended).

If you want to talk about practicality, there’s no question about it – go for the quartz watch. However, there’s just something about the craft and history in a mechanical watch that is still so attractive. Just look at Ball watches – their iconic watches from railroad history use automatic mechanical movement and are decked out with some amazing cutting-edge features as well.

For that reason, mechanical watches – especially luxury Swiss watches – are loved by collectors, and treated as prized commodity. If you are looking for a watch as a status symbol, heirloom, or investment, a mechanical watch is the clear winner.